Today is voting day in the Eastleigh By-Election caused by the resignation of the Liberal Democrat MP Chris Huhne, and I have been telephone canvassing for the Conservatives up to the last ….. Well nearly up to the last. My mother taught me that it was bad manners to telephone anyone after 9pm … We’re talking landlines now, so I stopped phoning before then.

The TV news has reported how fed up Eastleigh constituents are with the limelight squarely focussed on them and the number of political leaflets they have had come through their letter boxes. I’m sure the quiet will be restored again in Eastleigh next week.

Eastleigh have a Lib Dem Council, and up until Chris Huhne’s resignation, a Lib Dem MP. It will be interesting to see how the Eastleigh constituents voted today and find out the result of the Eastleigh By-Election tomorrow morning.

My own opinion is that it will be a Conservative win. If you had asked me two weeks ago I would have said that the Lib Dems looked like they would win the seat (this is my own opinion again).

In another twenty minutes it will all be over, bar the count. Fingers crossed for a Conservative win.

I attended the CWO’s AGM and Conference in Westminster and what a fantastic day. There were speeches by the Chairman and Vice-President of the NCC, introduction by the President of the CWO, speeches by MP’s and debates chaired by MP’s into a range of subjects including cultural attitudes towards women, ageism and water. On paper it doesn’t grip you but I can vouch for there being excellent information sessions followed by interesting debate. The day flew by and has given me food for thought. Pictures of the day can be found in my gallery soon.

The Conservative Women’s Organisation is run by group of dedicated political volunteers who support women into public office. I have found Pauline Lucas and Margaret Bird to be the warmest, friendliest and most approachable of ladies who have unlimited energy and have helped me enormously. The website is here http://www.conservativewomen.org.uk/and I cannot recommend their projects enough.

The CWO runs development workshops at CCHQ which develops skills women require to become Councillors or to pass the Parliamentary Assessment Board. I have attended some of these courses and found them to be invaluable. I recommend them to anyone who wants to become politically active.

A man admits murdering a woman and is then granted bail. I feel there is an injustice when I see images of Oscar Pistorius going out in his car and being free after admitting killing his girlfriend. His girlfriend, Reeva Steenkamp, will never have the privilege of life again and how must her family feel seeing him free?

Whilst my family and I were eating our Sunday dinner today we debated the issue of Pistorius’ release around the table and I feel strongly that Pistorius should not have been released.

South Africa is a violent society and I understand that every day the South African newspapers report a new murder, and yet another statistic of violent crime in a country that accepts this as normal. I have advised my daughter to never visit South Africa; the images of Pistorius free sends a message that I interpret as “life is cheap”.

My family suggested that Pistorius is out on bail because he is not a risk to others and that he would not flee. This man has admitted that he killed his girlfriend. If I awoke at night and my husband were not in bed beside me he would be the first thing I would look for.

It doesn’t ring true that Pistorius would shoot someone in the bathroom because he was scared. You would not fire a gun at the bathroom if your partner who usually sleeps beside you is not in the room. You would assume that your partner has gone to the toilet. Pistorius’ claims of being vulnerable because of his disability prove that he is a risk to the public as he shoots first because of his disability. Why is he not a risk now when the symptoms leading to him shooting his girlfriend have not changed.

I have been visiting Broomfield Park since I was a child. My family lived  opposite the park in Broomfield Lane and my siblings and I would cross the road and jump or clamber over the park fence to gain entrance. We kids couldn’t be bothered to go an extra 50 metres and use the gate.

My parents left us children to freely come and go to the park. Mum and Dad knew that Hassan, the friendly Park Keeper, in his smart uniform with a peaked cap would keep an eye on us. Hassan was of Turkish Cypriot origin, as were we, and my parents had spoken with him to keep an eye on us and keep us safe in the park.

If you are familiar with the area you will know that the Grade II listed house in Broomfield Park that originates from the 16th century was devastated by fire in 1984. It is a shameful that Broomfield House exists as charred remains held up by scaffolding and has done so for nearly 30 years.

Today I was interviewed by Christine Lalla, a film maker who is making a short documentary film with the intention of raising money for the restoration of this historic building. I recounted my childhood memories of Broomfield House to her.

The house had been a Natural History Museum and on the ground floor there was a live bee hive made of glass so you could see the bees in all their activity. There was a glass tunnel which took the bees to their hive from the world outside. It was fascinating to watch, in fact a hive of activity. I remember visiting the upstairs of the museum where there were drawers of exhibits. Some of the exhibits were dead butterflies pinned out with their names. I knew it to be Natural History but to me it seemed very unnatural to look at dead butterflies when there were many live and colourful butterflies fluttering around the flowers outside the house. I only remember going upstairs a couple of times.

I look forward to seeing the end product and hope that it is not just a film but is the restoration of Broomfield House. Does that mean restoration to its former glory? Or does it mean giving the building a purpose, like a school?  It mustn’t be left to rot for another 30 years.

This is a picture of me going for a run in my London Ambassadors outfit. I’m posting this for the disbelievers who don’t believe that I run, namely Ayten and Amy! 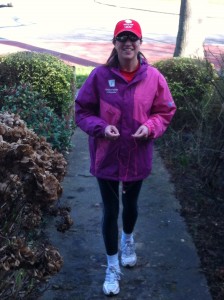 The plot was previously a car park opposite the entrance to Grovelands Park and  would have been used mainly by people going to the park. Is the sale of this plot of land for housing the best outcome for community property? The sale has brought the Council revenue for the short term but what will the long term effect be?
In this area and the nearby Lakes Estate Conservation Area there is a lack of school places both for primary education and secondary education. There is already a crises area in the centre of five or six community schools where children will not be admitted into a school near their home.
Enfield Council have a Primary School Expansion Programme to address this problem in areas all over Enfield however this is a reactive approach that will not resolve an ever growing problem, particularly as some of the proposed schools have objected and been withdrawn from the programme.

The Council receive a five year forecast from the GLA informing them of the number of Education admissions they will require year on year so there is no excuse for the LEA’s lack of forward planning.

There are two publicly owned buildings in Palmers Green that could be ideal for new schools, namely Southgate Town Hall  and Broomfield House. I am not so naive that I don’t understand why Council officers prefer housing opportunities in this old Civic building and this historic building as opposed to Education, and the answer is money.

Housing will demand increased services and Education will provide a service.

Housing will pollute and Education will be green, local children walking to their local school.

A website and app that I have recommended to many friends who want to lose a few pounds is www.myfitnesspal.com.

It is a free tool that supports anyone trying to lose weight. I can connect to my profile from my iphone and from my laptop and can log my meals and snacks from both and they will be synchronised.

I use it to monitor my food intake which has the direct effect of making me eat less. Keeping a food diary makes you think twice about having that extra piece of cake or chocolate.

I record my food intake using the database which provides the amount of calories for each item. I also record any exercise I have undertaken and myfitnesspal tells me how many calories I have burned off. Not very many just recently!

You can share your goals or achievements using social networking but I decided against that as well.