I am organising an open meeting on Tuesday 30th April to debate Primary School Admissions. FLDRA (Fox Lane and District Residents’ Association) are facilitating the meeting of which I am a committee member.

In our residents’ association area there are insufficient Primary Schools and Primary School places. There is one good community school, Walker, which is Ofsted 1 and an Outstanding school. Many parents cheat to get their children into this school by taking out a short term let on the school’s doorstep and then moving once their child is in. Most admissions each year are siblings so someone who lives in Finsbury Park, for example, can send their 3 children to Walker School because of the Sibling criteria. Maybe the sibling criteria should be changed?

The meeting is in its early stages but if we get the buy-in from local and central representatives then we will have a panel to debate with. The meeting will have 2 parts:

The details of the meeting can be taken on the website I have created for the Campaign We Want Local Schools. 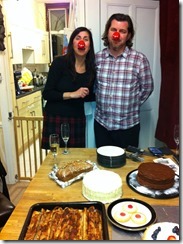 Thank you also to all those people who supported us in the Bake Off by either sponsoring us or paying to eat our cakes.

It was funny, but also heart breaking to watch Comic Relief on the television whilst we Baked Off. As a mother with young children I got angry hearing about the preventable illnesses that the children in Africa are suffering. My anger is directed towards the Government’s of the countries which are rich in natural resources but allow their people to suffer. Thank goodness for charities like Comic Relief that improve lives.

I am fortunate to have generous friends and family who have helped to make a difference.

The title of Great Bourne Hill Baker went to the only male baker …. the odds were 7 to 1 against … and he is now the official baker in our house …. my Jon! 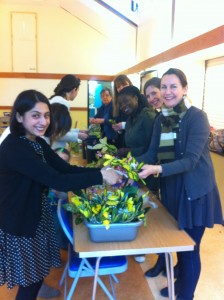 Today is Mothering Sunday and my family and I will be going to the Family Service at St John The Evangelist in Palmers Green.

Yesterday we Sunday School mothers and other church members met in the church to make posies in preparation for today.

The Great Bourne Hill Bake Off

The Great Bourne Hill Bake Off …. well maybe not great …. and maybe not everyone lives in Bourne Hill … and maybe not funny (although we haven’t seen my daughter’s baking yet) …. but a few of my friends have committed themselves to raising money for Red Nose Day. If you are in the area on Friday 15th March at around 7.30pm and fancy some tea and cake , then for a donation you can sample our wares after a winning cake has been selected.

If you’re not in the area but want to support the cause please sponsor me. Thanks.

Today is International Women’s Day; It falls on March 8th every year and has been observed since the early 1900’s.

I was asked to represent David Burrowes MP at an event to celebrate International Women’s Day. David Burrowes is the Conservative MP for the constituency I live in of Enfield-Southgate. I feel proud to have been asked and that David Burrowes has shown faith in my ability to speak publicly for him. 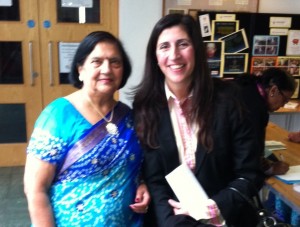 The event was being celebrated by Enfield Saheli and Naree Shakti. Naree Shakti is an organisation that aims to provide an informal advisory service for Asian women who are isolated, by language and cultural barriers. They also provide a number of activities for Asian women, including regular social events, yoga, and an elders drop in club. Naree Shakti have focused on women suffering from domestic abuse and have been very influential within the Asian community in Enfield.

The day to celebrate women was inspiring to say the least, all of the women speakers gave interesting talks or readings. Vijay Rattan gave an informative talk on the historical landmarks in Women’s history and how women have forced change.

The Mayor of Enfield spoke of personal experience, about being widowed and finding the strength like many other women in similar situations to carry on.

My talk gave a bit of background about me trying to progress my career in a male dominated profession and then a message from David. I then summarised the action that the Government is taking to tackle violence against Women and Girls and finally I read parts of a letter from Justine Greening MP written in celebration of International Women’s Day.

The message from all of the speakers was of encouragement to women and of the strength of women.

Do the same again and get the same result

Conservatives need to appeal to a younger audience. The Eastleigh By-Election has proven that the old tried and tested campaigning methods aren’t working.

I was involved in telephone canvassing and that is one method of engaging with a specific demographic of voters; voters who have a landline. Other methods of engaging with younger voters are needed. If I had been standing in Eastleigh I would have used a Facebook ad and targeted the area for my advert and targeted a specific age group of 18 – 40 years. I would have been tweeting everyday and made sure all my literature had my Twitter details so anyone could follow me.

I admire Maria Hutchings for her honesty and making clear what her opinions were; for example being opposed to same sex marriage, and I’m sure that would appeal to the old Conservatives. I also think that it would have the opposite affect on younger voters.

The Association offices need to be welcoming and encouraging the local community to get involved.

I would like to set up or participate in local a Conservative’s Women’s Organisation but because there is a regional office that exists I have been rebuffed. The regional office has invited me to a Christmas lunch which I appreciate however my type of organisation will be the one that teaches new skills, that raises money for charity, that appeals to mothers of younger children as well as older children and has a local community focus.

In summary new ideas, new people and new suggestions should be welcomed. We Conservatives should try out new things and then maybe we’ll appeal to a wider audience. It doesn’t matter if new ideas fail, failure is part of life, however doing the same thing over and over again and expecting different results is madness.