The Great Bourne Hill Bake Off

The Great Bourne Hill Bake Off …. well maybe not great …. and maybe not everyone lives in Bourne Hill … and maybe not funny (although we haven’t seen my daughter’s baking yet) …. but a few of my friends have committed themselves to raising money for Red Nose Day. If you are in the area on Friday 15th March at around 7.30pm and fancy some tea and cake , then for a donation you can sample our wares after a winning cake has been selected.

If you’re not in the area but want to support the cause please sponsor me. Thanks. 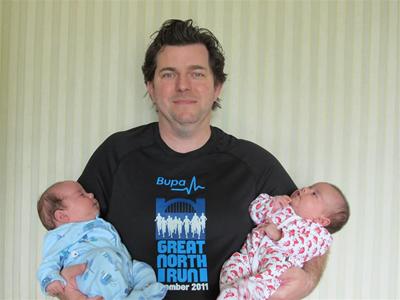 Last year I signed up for the Great North Run to raise money for the British Heart Foundation. I wanted to raise money for BHF because of the good work they do for those with a heart condition, something close to my heart. My brother Mem was born with a heart problem that he suffered with all his life. Sadly Mem lost his fight for life 3 years ago. My husband Jon has also suffered and had a quadruple heart by pass 4 years ago.  I wanted to raise money and give something back for all their good work.

Shortly before the race I found out that I was pregnant with twins and followed advice not to run. Fortunately my husband Jon took over and did the run for both of us. This is what I wrote on the day:

I  have to say what a fantastic event the Great North Run is! it is packed  with fun, energy, optimism, enthusiasm and raw emotion.

The start of the race is a long drawn  out affair but  no-one minds. There are plenty of fluids provided to  the runners at the  start line which caused an outpouring of runners  leaving the start for  an emergency toilet break. It was all very French  with everyone using  the bushes and trees along the course to relieve  themselves, women and  men alike.

The organisers put on a warm up which  was displayed on the huge  screens to all the participants, about 10  minutes before the off which  all the runners participated in  and  seemed to enjoy.

The Metro radio DJ who was being  piped out was a jolly man who was  equally funny and sincere in his  broadcast. He had us in tears when he  asked everyone to spend a few  minutes remembering their loved ones and  why we were all  there representing different charities and then playing  “Abide with  me”. It was very moving!

Ant and Dec started the run and must have sore hands today.

They  started people  running by slapping the runners hands as they passed them  and wishing  them good luck with the sounds of “Let’s get ready to  rumble” in the  background.

And then 13 uphill miles to the  finish line to receive a finishers  medal. The support on the course was  fantastic! People were coming out  of their homes to give the runners  sweets and biscuits as well as moral  support of cheers, chants and  applause.  Well done all!

I was amazed at the finish line by  the number of runners wearing  silver ponchos who had the energy to be  walking around the town to get  to transport and eventually home.

A marvelous day! I look forward to next year!”