We, my family, the in-laws and I, spent a glorious Bank Holiday weekend at St. Ives in Cornwall. After doing a key exchange with my neighbours so they could look after Tin Tin, the cat, whilst we were away, we were off.

We had to exchange keys as we had taken care of their guinea pig, Lily, before the weekend. That had been a concern as Lily had been to the vet a number of times prior to us looking after her. I was worried that the hormonal Lily, who was overheating and had to have an ice pack in her cage day and night would not make it and I didn’t want her to expire on my watch. Fortunately we left her in good health as we set off on our long weekend.

St. Ives has a beautiful little harbour that is quite unspoilt. The resort still has a feel about it that must have been there in Victorian times. When the tide is out you can walk and paddle in the harbour itself but there is also a lovely long and wide beach next to the harbour.

My babies loved paddling in the sea and building sandcastles on the beach. No other entertainment was needed. On one of our evenings we had a Cornish pasty al fresco. Just as the babies were tucking in to their pastry we were joined by a gang of sea gulls who, given half a chance, would have run off with our dinners. 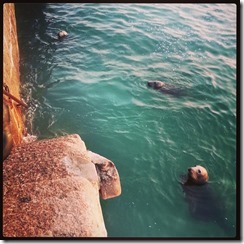 The evening was completed by a walk up the quay where fishermen were bringing in their catch. As we walked along we noticed huge eyes looking up at us from the sea. The seals (or sea-lions, I don’t know the difference) were seemingly waiting for easy pickings from the fisherman. The whole family of 4 seals came up for a feast which they never got. Children in wet suits were jumping off the quay for fun and neither the children nor the seals were bothered by the presence of the other. It was lovely to watch.

Whilst in Cornwall we felt that we had to visit a few other sights. I was very disappointed with Land’s End. As we approached Land’s End we saw that to enter you had to make a payment. I think I was expecting a natural, unspoilt beauty spot. I was surprised to see amusement arcades past the payment booths and what appeared to be a commercial endeavour. So we turned around. We drove on to the Minack Theatre which was a wonderful surprise. The theatre created by one woman’s dream is a beautiful but natural theatre set into the rocks with a backdrop of the sea. I could imagine The Tempest being acted out with the Cornish Sea splashing up against the rocks. What an atmosphere! I would recommend this as a place to visit if you go to Cornwall.

Our brief holiday completed we came home by the Jurassic Coastline and made a number of stops including Exmouth, Budleigh Salterton, Sidmouth and Lyme Regis. Most impressive of them was Budleigh Salterton which is an unspoilt place of natural beauty. My children, husband and I paddled in the river that met the sea along with the lots of other families. I suspect the reason that it has remained un commercialised is because it is a very stony beach. If it had a sandy beach I’m sure the Victorians would have turned it into a seaside resort.