How can it be that we in Britain, who set great store by our democratic process, can permit an electoral system which is so easy to cheat?

Most people will know that it is against the law to vote twice in a General Election, or for that matter any national vote, but most people probably do not realise that there is no method to control how many times you may vote in a national election.

If you have two places of residence, in different areas, then you are entitled to vote in local elections in both local authorities, which may not be unreasonable. The fact that the register to vote on local interests is held by the local authority is to be expected but the local property based register is also used for voting on national interests and therein lies the problem.

Society sets great store on encouraging people to vote, reminding them of the sacrifices of those who have fought and died for the right, that women have barely had the right to vote for 100 years, and that in some countries in the world people still are unable to vote.

Surely it is an affront to all those who have made sacrifices in the past to not have a level of due diligence when allowing people to vote?

I can hear the naysayers already with their issues on the complexities of merging local electoral registers, introducing standard ID checks, and the possible impact of a national database on an individual’s privacy.

Democracy is a prized asset and we should ensure that it is not open to abuse or tarnish by modern society. We need to debate this and if agreed introduce stepped change to ensure the value of democracy is not diminished.

When the Parliamentary Petition Committee is re-convened, following the 2017 General Election, I shall be raising a petition for Electoral Reform to have the current electoral register and voting processes debated by Parliament, with the desired outcome of a national database and greater controls on voting.

I used a postal vote to vote in the 2014 Local Elections in May because I was a candidate in Edmonton and I wanted to be visible in Haselbury ward on polling day. I wanted to make sure that I voted but because I knew I would be busy I applied for a postal vote. In casting my postal vote I realise how open to abuse a postal vote could be and that it would be very easy for someone other than the voter to cast the vote.

I think that there should be electoral reform regarding postal votes however I do not believe that removing postal voting is the answer, much as I would like it to be. Voting in person is a more secure method of ensuring that the voter is the person they claim to be particularly as reforms planned for this year by the Electoral Commission will require proof of identification to be shown at polling stations.

The turn out at Haselbury was under 40% and it is likely that the turn out will continue to decrease in the future, particularly in local elections. Politics needs to engage with younger voters and until there is an online method of voting I suspect that many of generation z will not cast their vote when they come of age.

Postal voting needs to have security applied to it that a voter would not easily give out; for example I wouldn’t give just anyone my banking password or my National Insurance number. When I have applied for a passport there is a secure process to follow and this ensures that you are the person applying for the document and this is the sort of check that should be used for postal voting.

At present all that is required to cast a postal vote is date of birth and signature; this really is not secure enough as people will easily give out their date of birth. Recently I have given my date of birth and signature to my dentist, a high street shop, my political party, my doctor and loads more. Recently I have given my National Insurance number or Passport number to no-one. My point is make it harder for fraud but make voting easier. 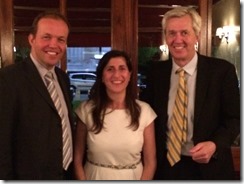 David Burrowes MP and Nick de Bois MP attended a meal in Cockfosters to meet with Turkish speaking Council Candidates and show their support in the forthcoming local elections. Due to their Parliamentary commitments David and Nick didn’t have the opportunity to eat the meal that we Council Candidates enjoyed.

The evening was an opportunity for local Conservatives to let the Turkish speaking community know what we can do for them if they vote for us on May 22nd through the Turkish Press. 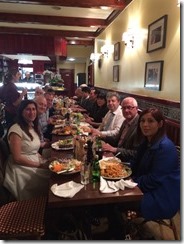 An enjoyable evening after days of canvassing in Edmonton.