My first party conference was a great experience. I came away feeling very motivated and determined that I would work hard for the Conservatives so that we win the General Election. 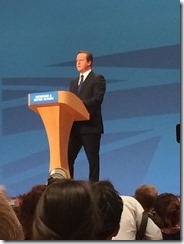 It wasn’t all about listening to great speakers although there were some great moments. For example I am not convinced that Michael Gove has a Bichon Frisée puppy dog called Snowy but it was a very funny moment and it left an image of Michael Gove stroking the dog in not too dissimilar a fashion to a 007 baddie. Don’t get me wrong I am a huge fan of Michael Gove! What the Chief Whip said was that he would trust his Bichon Frisée puppy dog Snowy over Ed Miliband to face down Putin, very funny.

Other memorable moments were when David Cameron imitated William Hague and then went on to move the audience near to tears by his personal experiences of the NHS. The Mayor of London was, as expected, hilarious even if the audience were slightly concerned that they might get hit by a brick. 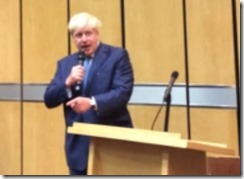 I managed to do some practical work whilst at conference and attended the Road Trip 2015 to deliver leaflets and I manned the phone for Kris Hopkins MP with my friend Tanya Graham, the PPC for Bradford South.

I got involved in debate over childcare and wanted to get involved in education policy debate but it was so popular that it became impossible.

I attended other talks that I didn’t have enough experience to debate such as CAMRA, the Campaign for Real Ale. You probably think it was a man who persuaded me to go, but it wasn’t it was a Yorkshire lass! Very interesting and I’m sure it’s popularity was helped by the bottled ale being served.

A few pics from a memorable conference. 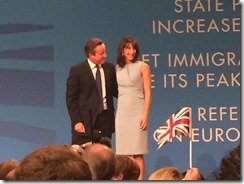 I was fortunate to be at City Hall for the Mayor of London announcement. Well done Boris!