» Around Me » Tottenham Riot 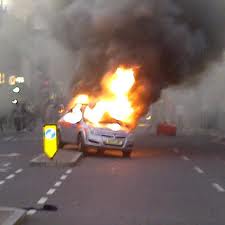 My daughter worked at Spurs yesterday and when she left the football ground just after 8pm she saw the build up of the riot happening. Fortunately she managed to avoid the trouble by travelling in the other direction.

What began as a supposed peaceful demonstration led to a full scale riot. This reflects the tensions that have been brewing in the Edmonton and Tottenham area for months following a number of murders. It is astonishing that this has been allowed to escalate to this proportion.

It is doubtful that the initial protest could ever have been peaceful given the facts surrounding the death and the Police shooting of Mark Duggan. Would the Police have been able to calm and subdue people who view them as the agressors in this incident without preparation?

It does seem from news reports that the Police were very late in getting involved and were not prepared for the levels of violence. Perhaps the Police were policing the football match and preparing for the Hackney carnival?

Of course there is no excuse for the opportunists who take advantage of an awful situation by looting. After seeing various streams on Twitter and BBM I’m sure that social networking doesn’t help these situations where easy pickings can be broadcast to many.

Where are the BBC today? I would expect something of this scale to be on covered on national TV; they appear to be looking for UFO’s!