As promised by Nicky Morgan MP, the Secretary of State for Education in the lead up to the general election and after, the government have announced that they have secured community language exams. The exams which include Turkish were threatened to be discontinued by examination boards. Conservative colleagues and I supported Londra Gazete in their campaign to reverse the unpopular decision and Nick de Bois met with OCR to ask them to reconsider. A good result for the community and a clear message that Conservatives deliver on their promises. 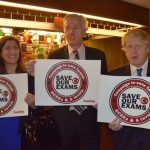